Introduction to the wet IPDM issue


The Infiniti G35 is a technology filed car. as early as 2003 it already had a CAN bus and a few computers that take advantage of this network. This complexity comes with the cost of horrible situations when a failure of the CAN bus occurs. the problem described below affects the G35 after heavy rain fall. the I.ntelligent P.ower D.elivery M.odule cannot do it's job properly at that time and it affects the whole CAN bus. so all communication between the other computers in the car is not working. This kind of issue is really annoying on a luxury car and can lead to a loss of confidence in the car itself if not fixed.This situation occurred to me after a heavy rain, a quick search on the web revealed a few Youtube videos showing the trouble but no clear solution or understanding, people are stating that the trouble goes away by itself after a while. That is no answer for me, hopefully all those hours spent on understanding the G35 wiring diagram before buying the car was worth it!

*The video is not mine btw

the list of symptoms were noticed on a single drive home lasting about 35 minutes and totaling 50 km. the list is quite exhaustive and so was the situation. not the kind of crappy behavior you would expect from a luxury car....

NOT WORKING SYSTEMS( CHOOSE YOUR PICK THERE'S PLENTY FOR EVERYONE! )

All other gauges are not moving or being totally erratic.
Additionally those systems are not working properly.


On older cars a 'gutter box' of some sort was draining the rain water coming to the bottom of the windshield and conveniently channeled it to the bottom of the car, it is called a cowl dash.on conventional design, only the wiper arms mechanism and wiper motor are installed there, end of the story. Nissan on the G35 decided they wanted to save weight and probably some money so they designed the car WITHOUT a cowl dash. Result:: when it rains, or you wash your beloved car, there is a waterfall running on the firewall inside the battery and Brake booster compartment. at the bottom of those boxes are holes meant to drain those boxes.


First problem: the IPDM sits low cramped in the battery compartment adjacent to the firewall, there is always a humidity risk for this device since the water flow is in it's back, common sense suggest to never place critical electrical components in the way of water ...this is only common sense though...

Second problem: the battery compartment is only equipped with one drain hole at the bottom and IT COMPLETELY CLOGS WITH THE YEARS! this lead to water accumulation in the bottom of your battery compartment, with sufficient water input it can get high enough to disturb your IPDM and voila You reproduced the problem on your otherwise pristine G35! (mine was completely clogged with mud and the water level was about 1/2" high.) looking down the battery compartment does not show much, you need to bend out of the way stuff and go there with your fingers to tell.


Third problem - the plastic battery tray gets filled with water under the battery and there is no drain holes in it.
( the blame goes to the cowl dash less design ) so you carry around about a glass or two of water that splashes here and there on hard accel/braking/cornering. Removing the battery tray and drilling holes at the bottom would drain that water accumulation when it fills.

tools needed to fix this

The IPDM is placed at what seems to me THE WORST PLACE EVER for a module as critical as it is.This module controls electrical power distribution across various systems and by placing it there endanger the CAN bus operation. I hope NISSAN was wise enough to improve on their electrical designs over the years... 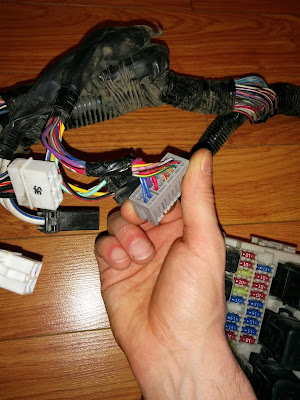 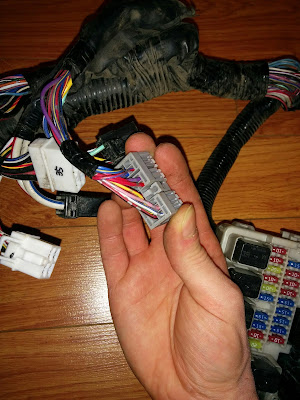 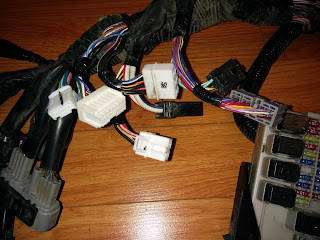 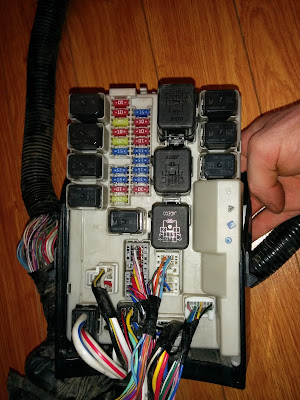 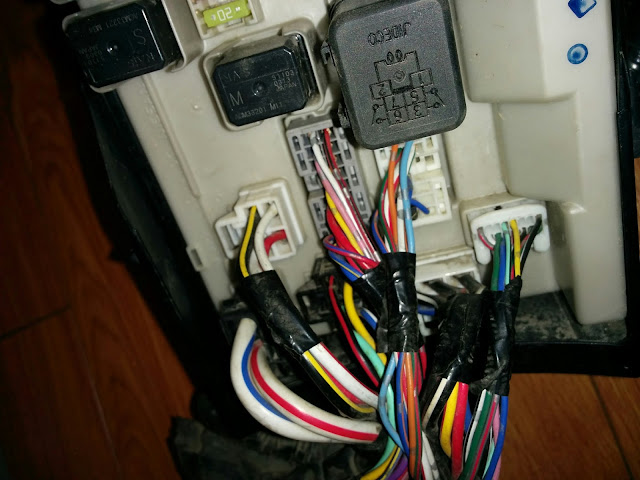 OBD1READ :: What if your ECU is supported, but your wiring harness is missing wires?!

In the 90s TOYOTA decided to save money on wires...sometimes!

The diagnosis box will show spaces for signals and those signals won't have any wires and contact going to them. Looking inside the ECU can prove the ECU pinout is OK for OBD1READ to work. You would find TE2,VF,B+ and E1 at the ECU printed circuit board, but TE2 would be missing in the engine wiring harness that goes to the Diagnosis Box. Without TE2 it is not possible to trigger data output,so we need to get TE2 into the diagnosis box.

Here is what you can do to make your wiring harness OK to for use with OBD1READ.

I suggest using micro screw drivers to work on releasing the contacts from a connector and diagnosis box, it takes some time to master this. I will not go into depth on this subject in this post.(You will probably need to do this to get your spare contacts from a junkyard harness)

You need to find TE2 inside the ECU, 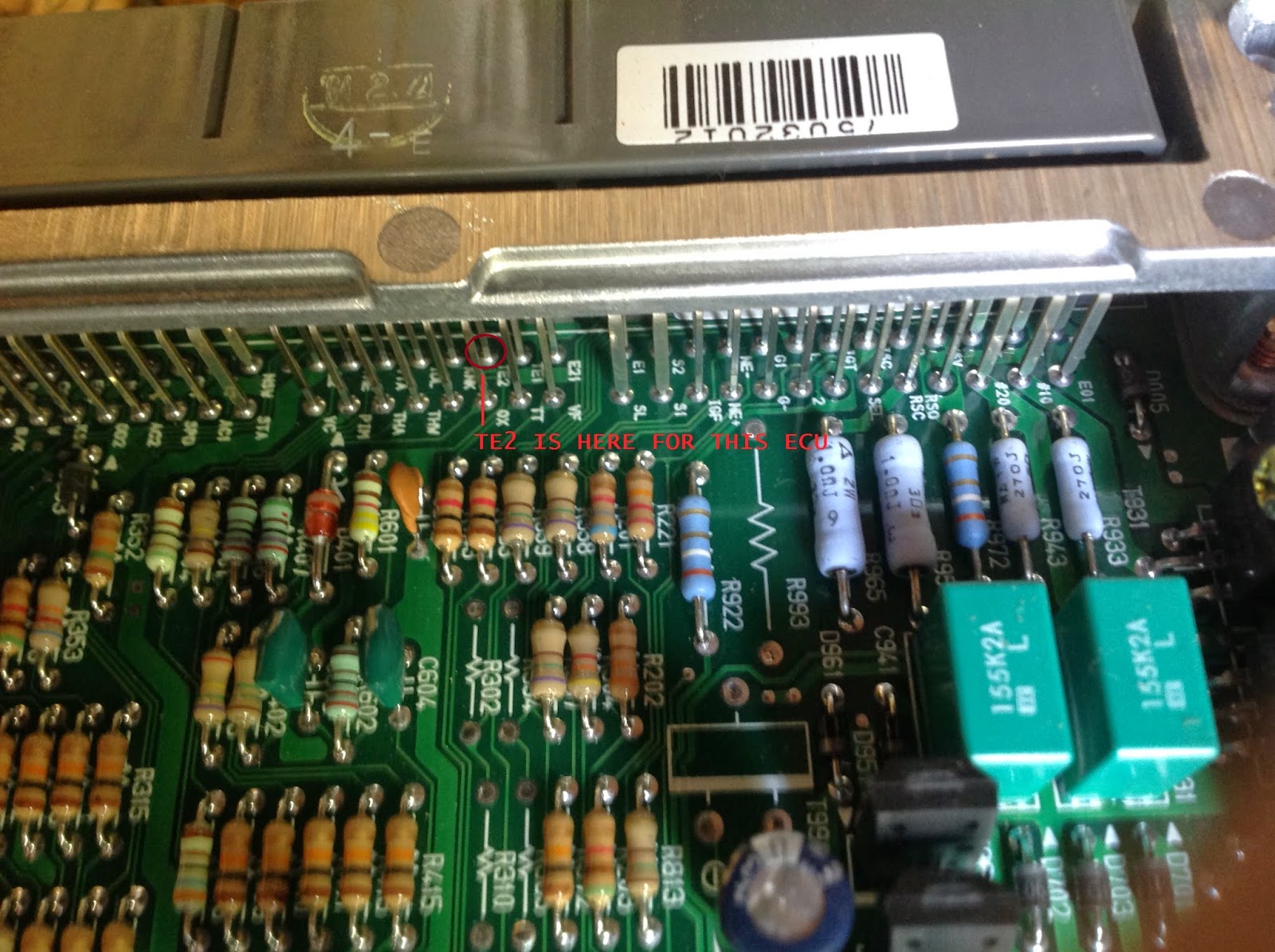 Then you need to add a new contact wire to the corresponding ECU connector. 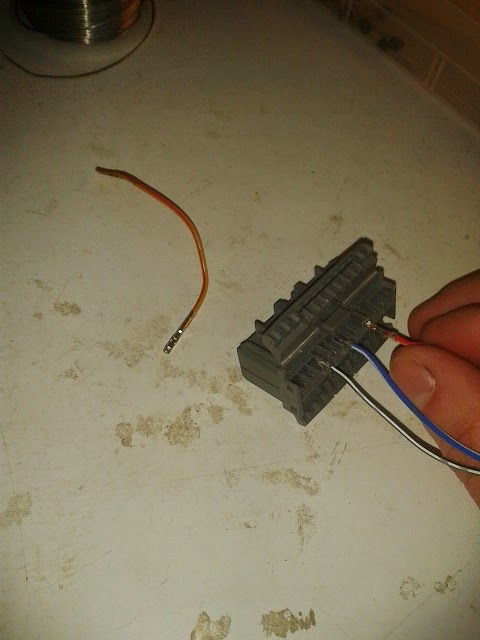 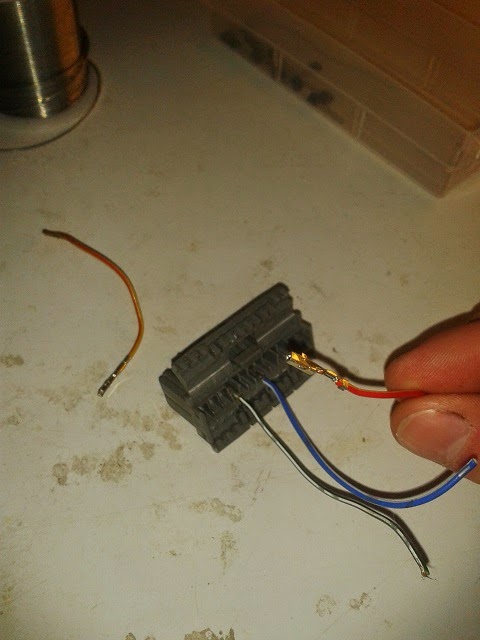 After you have a contact going into the connector you need to solder a wire to it and run that wire to the Diagnosis box.


At the diagnosis box you will need to install a contact for the missing TE2 pin and solder that contact with the wire you just installed. this is exactly like on the ECU connector except the contact is different from the ECU connector

After this you will be able to trigger the OBD1 data output like any supported cars.
You can use this proccedure to test that your wire addition worked