TOYOBD1 Android Datalogger :: Jumper needed on most RWD I6 and V8 cars

Why does it need a jumper in the first place?

To output data, the ECU must be put in TEST MODE 2, this is done by jumping TE2 and E1. On most cars Toyota conveniently placed it in the engine bay diagnosis box, but decided to not place it on those cars. the OBD1READ internally jumps TE2 and E1 when connecting the tool,(the green wires on the bare unit).since the TE2 pin is missing in the diagnosis box it can't be jumped with the OBD1READ too. instead you must do it yourself at another (less but still convenient) place called the DLC2 connector. this one is in the cabin ,under the dashboard near the steering column, regardless of car being LHD or RHD. What needs to be done is place a short wire between TE2 and E1 to put the ECU in TEST MODE 2. 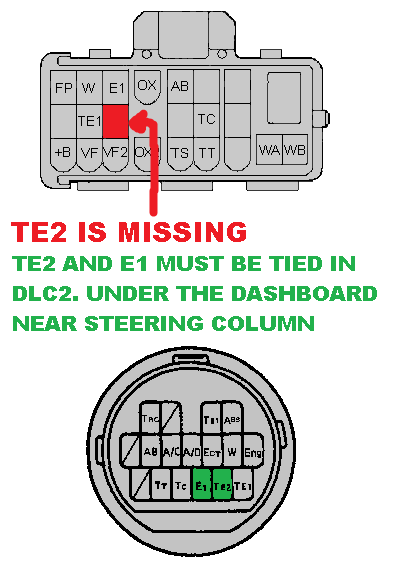 Cars known to be affected by this Toyota design